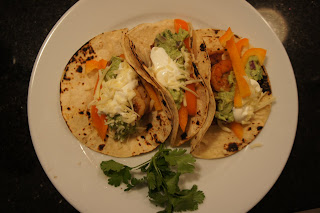 A few weeks ago, a couple of friends and I started a Wednesday night dinner called "Single Jen(n)s' Night" because my one friend Jenn and I both have husbands who are normally gone all week on business travel. Our friend Laurie joins us, even though she's not a Single Jen(n) during the week. Single Jen(n)s' Night is all about taking time to catch up with friends, letting Jenn have some adult company, and giving me an outlet for my blog.

The first of these recipes I tried on my unwitting participants was shrimp tacos. I've decided to call them "Shrimp Guaco Tacos" mainly because "guaco" rhymes with "taco"... but also because the tacos were served with homemade guacamole. So this recipe really has two parts: the tacos and the guacamole.