You can do them both ways... 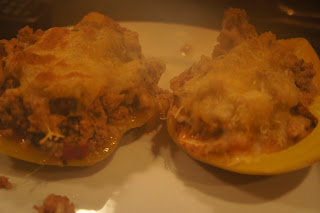 Hey!  Get your mind out of the gutter.  I'm talking about food here!  More specifically, I'm talking about stuffed peppers.  They're a pretty easy dish to make, but I always forget that I have them in my rotation.  A few weeks ago, I bought some ground turkey and was feeling a little ho-hum about what I would make.  I think the inspiration came to me as I was flipping through a cookbook; I couldn't stand the thought of making yet another meat sauce for spaghetti, and my thoughts turned to the Mexican flavors I love.  So I thought some stuffed peppers would be a perfect way to combine boring ground turkey and delicious Mexican spices! 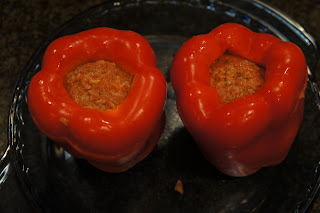 I've seen a couple of different stuffed pepper recipes; some can take quite a while, particularly if you stuff the peppers with raw meat and bake them in the oven.  But I have a quick recipe, too, where you cook the meat filling in a skillet and then add the stuffing to the pepper.  I like the baked version because it allows the pepper to sweeten a little bit and the flavors seem to come together a bit better.  But, after work, do you really want to wait over an hour for dinner to be ready?  Yeah, I didn't think so.  So, here you go... Stuffed Peppers Two Ways