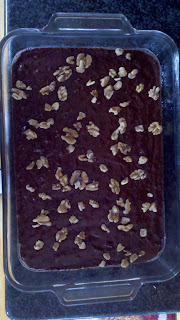 Yesterday, a recipe for dark chocolate brownies popped up on my Facebook news feed. The recipe was from Ellie Krieger, the healthy cooking chef from Food Network, and Paula Deen and Ina Garten's caloric opposite. I decided to make them, but on further inspection of my pantry I had to make a few adjustments. So here is the recipe with my adjustments. The result is a cake-y, moist, not-too-sweet brownie with a nice chocolate flavor. The cinnamon gives it a nice flavor dimension. You can save calories by omitting the walnuts, though they don't add too much fat - and provide Omega-3 fatty acids which are good for you!

Combine the cacao powder, granulated sugar, 1/4 c. canola oil, and butter in a double boiler or heatproof bowl set over a pot of barely simmering water, stirring occasionally, until butter is melted and mixture comes together.

In a medium bowl, whisk together the flour, Dutch process cocoa, salt, cinnamon, and baking soda.

Transfer the mixture to the prepared pan and sprinkle with nuts. Bake for 20-25 minutes, until a wooden toothpick inserted in the center comes out with a few moist crumbs. Cool completely in the pan on a wire rack. Cut into 24 squares.

Notes on this recipe:
* Whole wheat pastry flour: I used Bob's Red Mill flour, which you can find in the natural foods section of most grocery stores, or at Whole Foods. You can also order this from Nuts Online, which is where I source a lot of my ingredients.
* Bittersweet chocolate vs. Cocoa / Cacao: According to joyofbaking.com, if you don't have bittersweet chocolate, you can substitute unsweetened chocolate and sugar at the ratio of 1/2 oz. cocoa plus 1 T. granulated sugar for every 1 oz. bittersweet chocolate. If you don't have unsweetened chocolate, you can substitute 3 T. (20 g) cocoa powder plus 1 T. melted butter or oil for every 1 oz. of unsweetened chocolate you need.
* Brown sugar: I used dark brown sugar in this recipe, although the original called for light brown sugar, in an attempt to deepen the flavor a bit.
* Yogurt: The original recipe called for "low-fat yogurt" but I used low-fat Greek yogurt. What's different about Greek yogurt? It has a thicker, less watery consistency which I thought would contribute to a thicker, denser brownie.
* Cinnamon: The original recipe didn't call for cinnamon at all, but I added this to lend a bit more depth of flavor. Next time I'll try a "wicked" brownie by adding chipotle and cayenne pepper in along with the cinnamon.